Why we are short / underweight iron ore

Nick is responsible for researching stocks in the Metals & Mining and Telco sectors. He has 23 years industry experience and previously consulted on efficiency improvement & process streamlining in the mining industry. Nick holds a Ph.D. in Chemical Engineering and a Master of Applied Finance.

We have been short or underweight iron ore for some time because our research led us to conclude that commodities and iron ore in particular, would come under pressure from the second half of 2021. Many of the factors that have led us to this conclusion are driven by China and include unsustainably high steel production in the first half of this year, slowing credit growth, rising inventories of steel and iron ore and a growing environmental focus. Also relevant is the ramp up in production by Vale. We discuss these factors in more detail in this article.

Chinese steel production has grown at almost 11% in 1H2021, a growth rate not seen in many years. If this rate of growth was sustained over the full calendar year, steel demand would increase by almost the total amount of steel consumed by the US (or India) in one year. 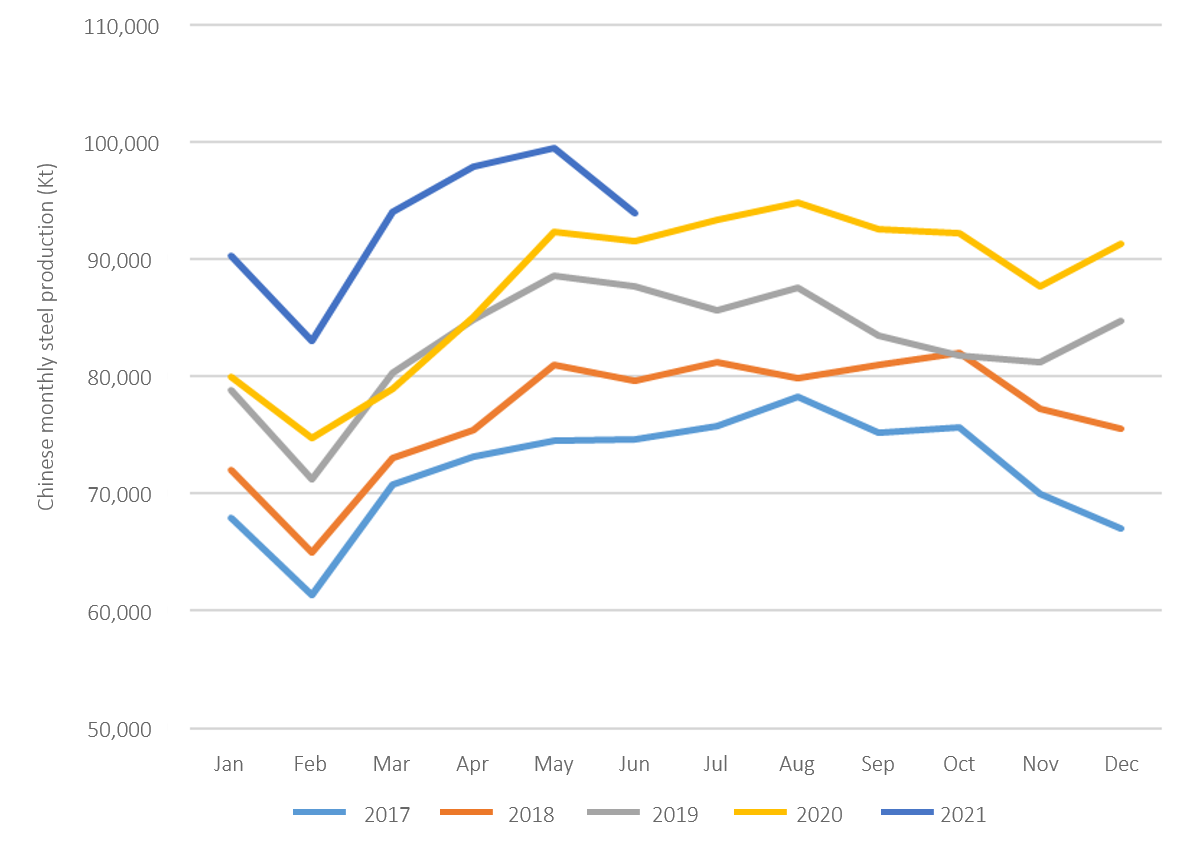 China’s credit impulse (blue line in Figure 3) measures the monthly change of the flow in new credit as a share of GDP. It has been slowing for some time. Historically it has led the performance of the S&P/ASX Metals and Mining Index (green line) by around 6-12 months. 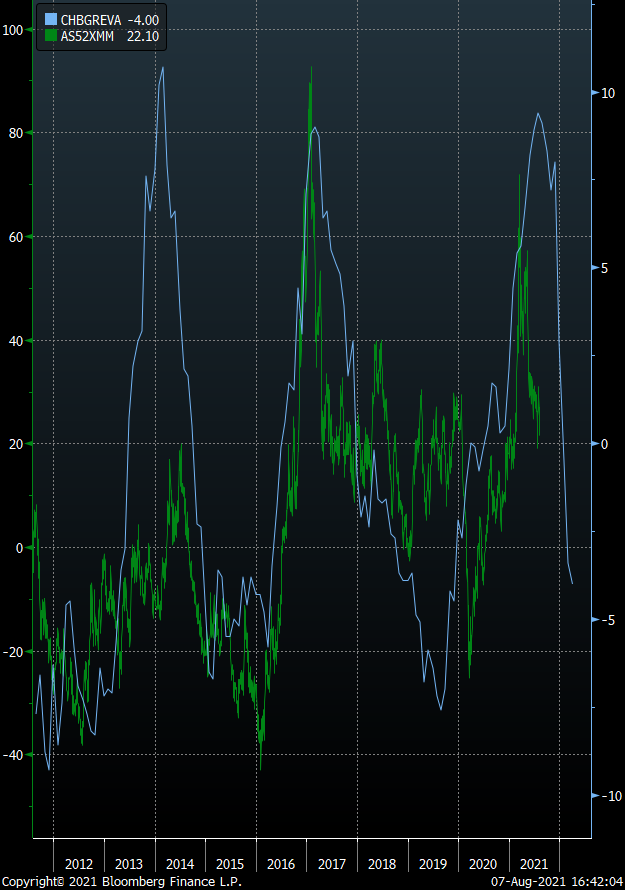 Supply is seasonal: weak in 1H, strong in 2H

Given the wet season in Brazil, iron ore exports accelerate in the second half of the calendar year. For 2021 this provides a mismatch as supply is increasing at a time when demand is weakening.

Finished steel and iron ore inventory have been rising

Iron ore inventory has been rising at a time when steel production has been very strong. China has introduced a carbon trading scheme. At this stage steel making is exempt, but our industry contacts suggest that over the next year or two the steel industry will be included. China’s policy seeks to reach peak carbon output by 2030 and become carbon neutral by 2060.

Over the last few years Vale has failed to produce to its capacity and this may also be the case in 2021. However, our focus is the incremental growth that Vale is able to produce each year and we are confident that Vale will deliver additional iron ore tonnes to the market this year and in the years ahead.

There are two basic methods to produce steel: one that requires iron ore and one that requires scrap steel. The scrap steel process or Electric Arc Furnace (EAF) path is being increasingly favoured by China given its relatively lower carbon emissions. Although currently only a small percentage of total steel production, EAF’s have gained in popularity over recent years - a trend we believe will continue.

This document has been prepared for financial advisers. This document must not be distributed to ‘retail clients’ (as defined in the Corporations Act 2001 (Cth)) or any other persons.

This report has been prepared in good faith, where applicable, using information from sources believed to be reliable and accurate as at the time of preparation. However, no representation or warranty (express or implied) is given as to its accuracy, reliability or completeness (which may change without notice). This communication contains general information and may constitute general advice. This report does not take account of an investor’s particular objectives, financial situation or needs. Investors should therefore, before acting on information in this report, consider its appropriateness, having regard to the investor’s particular own objectives, financial situation or needs.

We recommend investors obtain financial advice specific to their situation. Past performance is not a reliable indicator of future performance. Returns are not guaranteed and actual returns may vary from any target returns described in this document. Any projection or other forward looking statement (‘Projection’) in this report is provided for information purposes only. No representation is made as to the accuracy or reasonableness of any such Projection or that it will be met. Actual events may vary materially.

Any opinions expressed by ACP constitute ACP’s judgement at the time of writing and may change without notice. In some cases the information is provided to us by third parties, while it is believed that the information is accurate and reliable, the accuracy of that information is not guaranteed in any way. None of ACP, any other member or the IOOF Group, or the employees or directors of the IOOF Group are liable for any loss arising from any person relying on information provided by third parties. This information is directed to and prepared for Australian residents only. ACP disclaims all responsibility and liability for any loss, claim or damage which any person may have and/or suffer as a result of any persons reliance on any information, predictions, performance data and the like contained within this document, whether the loss or damage is caused by, or as a result of any fault or negligence of ACP, it’s officers, employees, agents and/or its related bodies corporate.

Bloomberg Finance L.P. and its affiliates (collectively, ‘Bloomberg’) do not approve or endorse any information included in this publication and disclaim all liability for any loss or damage of any kind arising out of the use of all or any part of any such information.

opens in a new window