Free markets and globalisation under pressure?

In some of my past notes to you, I’ve said that it’s important for investment professionals, like my colleagues and I, to prepare for what’s around the corner, and not just pay attention to what’s in front of us.

That’s because what’s around the corner may have even more influence on the long-term performance of our clients’ portfolios than what’s immediately ahead.

With that context, I want to discuss possible changes in the political economy and how they might affect markets.

Political economy is a term that’s not much used these days but, as the name suggests, is concerned with how political forces and ideas influence the economy and markets.

It’s fair to say that small-government, free market ideas have dominated many countries’ political economy over the past few decades.

In fact, they’ve been so persuasive that they were taken up not just by centre-right parties – think of Mrs Thatcher’s Conservative government in the UK, and President Reagan’s Republican administration in the US – but also by their successors, which, of course, included governments of their centre-left political opponents.

In the UK, Labour prime minister Tony Blair broadly accepted the Thatcherite settlement with its emphasis on competitive product and labour markets.

Bipartisan acceptance of market-driven economics in the US was signposted by Democratic president Bill Clinton’s 1996 State of the Union Speech when he declared "the era of big government is over."2

Western Europe too, which historically has been dubious about ‘Anglo-Saxon capitalism,’ eventually succumbed to the intellectual tide, exemplified in Germany where Social Democrat chancellor Gerhard Schröder reformed the country’s labour market and social welfare system.

Market-oriented policies have not been exclusive to wealthy countries. Developing countries, from Mexico to Brazil, assumed ‘The Washington Consensus,’3 as it became known.

Attempting to prove a simple straight-line relationship between public policy and financial market performance is thorny, but it’s probably more than a coincidence that investment market returns have been strong over this multi-decade cycle.4

Now there are signs that market-oriented principles may be losing their grip. Afterall, these ideas didn’t appear in a vacuum.

They were once a minority view in policy circles and amongst other opinion influencers. However, they won the intellectual high ground when the activist government policies of the post WWII period ran aground with the terrible stagflation of the 1970s.

New and different concepts were sought to tackle the malaise, and market-driven ideas were embraced as the way forward.

In the great political economy seesaw, free marketism could be pushed aside for something else, something that looks more like interventionist government.

Though President Trump’s tax-cutting and light regulatory touch policies were straight out of the small government playbook, his trade, industry, and immigration policies were not.

He was anti-free trade and anti-globalisation, citing the impact on blue-collar America and traditional industries. He sought deep cuts to legal (as well as illegal) immigration, arguably for nativist as much as employment and American workers’ wage reasons.

He was pro-tariff on the grounds that free trade was disadvantaging America and destroying US manufacturing. He looked to undo global supply chains so that industries would return home.

Recently, he won a House of Commons vote to raise taxes to the highest level on record, including on dividends, to fund health and social care.7

Mrs Thatcher must be rolling in her grave!

Recent events in China where the government has struck out at the tech sector, targeted high-profile individuals, including wealthy entertainment industry figures, and attacked private education providers, can be viewed through a similar lens.

In former Australian ambassador to China, Geoff Raby’s observation, “The leadership has seen that globalisation has become associated with rising income inequality”8 and the widespread crackdown is a response to “popular sentiment about inequality and unfairness.”9

Among major industrial country leaders, President Biden is rolling out what is probably the most ambitious government program since President Lyndon Johnson’s Great Society. To “reverse income and wealth inequality, Mr Biden favours large direct transfers and lower taxes for workers, the unemployed, the partially employed, and those left behind.”10

Joe Biden and Donald Trump are far apart philosophically and tonally, but the current president “has maintained the Trump administration’s tariffs on China and other countries, and introduced stricter ‘buy American’ procurement policies, as well as industrial policies to re-shore key manufacturing sectors.”11

Finally, there’s the COVID factor, as communities look to governments and public institutions to safeguard health, and cushion against the worst impacts of economic disruptions. Security of supply, especially of essential items, like pharmaceuticals, is paramount.

It’s unwise to assume that the future will simply be a straight-line continuation of the recent past. On that basis, it’s possible that the interventionist government inclinations of recent years won’t take hold and free market ideas will return to the driver’s seat.

We are considering both possibilities, and many others, through the Investment Futures Framework, which underpins the management of MLC’s multi-asset funds.12

Rather than imagining one or even several sets of outcomes and their associated investment returns, the Investment Futures Framework recognises the possibility of a vast number of scenarios (see chart) with a great breadth of return possibilities.

Many futures are possible 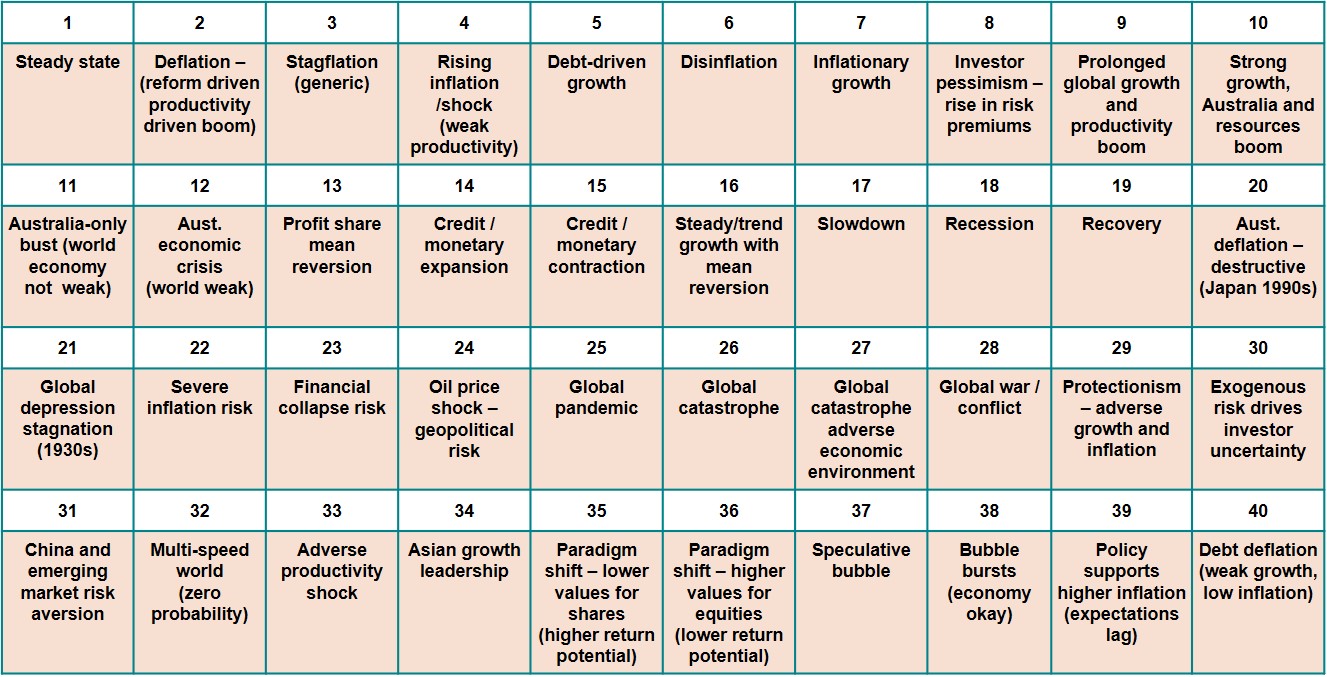 The Investment Futures Framework forces us to think about a range of possibilities as distinct from guessing what will happen. Investment professionals can easily fall into the trap of trying to land on a preferred ‘base case’ and position portfolios accordingly.

Moreover, a single base case scenario, or even instances where an upside case and downside case are also developed, runs against the world’s complexity.

Nevertheless, for the sake of following through on the theme of this commentary – the possibility of a turn towards activist government, let’s speculate on some possible high-level investment implications.

An increased role for government to address social and economic inequalities would require funding, in part, through higher taxes on business, wealth, and high-income earners. Debt, financed by issuing many more government bonds, would be the other side of the funding equation.

While investors may be reluctant to own more government bonds, central banks may be persuaded to do so to prevent interest rates climbing uncomfortably high. In this scenario, higher inflation would probably be tolerated by governments as a way of keeping a lid on public debt levels.

Higher inflation would have mixed effects on share markets as industries and companies with pricing power could pass on higher costs. Contrastingly, price-takers would have to absorb rising costs, crimping their profitability, in the process.

While this is conjecture, for now, rather than dismissing these possibilities, we think it’s sensible to map them out and consider the investment implications.

CIO Market Insights: ‘Participate and protect’ is tried and tested

In our view, investment diversification through our ‘participate and protect’ approach is the best way of dealing with uncertainty. There are no short cuts or magic bullets to long-term investment success.

The portfolios we manage for clients, participate in the higher return potential of growth assets, including shares, private equity, and infrastructure, while looking to protect them against the risk of market downturns through innovations including sophisticated derivatives strategies.

This tried and tested way of investing has steered our clients’ portfolios through many investment conditions over the past four decades, and we think is up to the job of doing so into the future.

This information is current as at September 2021. This information has been provided for the funds in the table below by MLC Investments Limited (ABN 30 002 641 661 AFSL 230705) as Responsible Entity for the MLC Investment Trust, NULIS Nominees (Australia) Limited (ABN 80 008 515 633, AFSL 236465) as trustee of the MLC MasterKey Fundamentals Super and Pension and MLC MasterKey Business Super products which are a part of the MLC Super Fund (ABN 70 732 426 024), and part of the IOOF group of companies (comprising IOOF Holdings Ltd ABN 49 100 103 722 and its related bodies corporate) (‘IOOF Group’). The capital value, payment of income, and performance of the Funds are not guaranteed. An investment in the Funds is subject to investment risk, including possible delays in repayment of capital and loss of income and principal invested. No member of the IOOF Group guarantees or otherwise accepts any liability in respect of any financial product referred to in this communication or MLCAM’s services.

References to MLC mean MLC Asset Management Services Limited. We are part of the IOOF Group.

This information may constitute general advice. It has been prepared without taking account of an investor’s objectives, financial situation or needs and because of that an investor should, before acting on the advice, consider the appropriateness of the advice having regard to their personal objectives, financial situation and needs. Investors should obtain the relevant Product Disclosure Statement or other disclosure document relating to any financial product which is issued by MLC, and consider it before making any decision about whether to acquire or continue to hold the product. A copy of the Product Disclosure Statement or other disclosure document is available on mlc.com.au or plum.com.au.

Past performance is not a reliable indicator of future performance. The value of an investment may rise or fall with the changes in the market. The performance returns in this communication are reported before deducting management fees and taxes unless otherwise stated. Actual returns may vary from any target return described in this presentation and there is a risk that the investment may achieve lower than expected returns.

Any opinions expressed in this presentation constitute our judgement at the time of issue and are subject to change. We believe that the information contained in this communication is correct and that any estimates, opinions, conclusions or recommendations are reasonably held or made at the time of compilation. However, no warranty is made as to their accuracy or reliability (which may change without notice) or other information contained in this presentation. Any projection or forward looking statement (‘Projection’) in this communication is provided for information purposes only. No representation is made as to the accuracy or reasonableness of any such Projection or that it will be met. Actual events may vary materially.

This communication is directed to and prepared for Australian residents only. MLC may use the services of any member of the IOOF Group where it makes good business sense to do so and will benefit customers. Amounts paid for these services are always negotiated on an arm’s length basis.

MLC funds referenced in this communication are listed below. These funds appear on MLC’s platforms, in addition to a number of external platforms:

Complete our contact
form and one of our team
will get back to you.

opens in a new window